Thank you for submitting your email.

Solbian and Hevel Group are the proud partners of the Solar Boat Team at the TU Delft. For the first time in Dutch history, the TU Delft Solar Boat Team is taking the step to develop a solar boat for the sea. It will be a trimaran, a boat with three hulls, which will completely control the ocean on solar energy. On Tuesday 15 January, the team presented the new design of the boat. With this boat, they plan to win the world championship for solar boats in Monaco this summer and to break a world record by crossing The Channel as the fastest solar boat in the world.

Solbian and Hevel Group are the proud partners in this promising project. The TU Delft Solar Boat Team is one of the Dream Teams in the D:Dream Hall on the TU Delft campus. The name of this building is an acronym for: “Delft: Dream Realization of Extremely Advanced Machines”. In the D:Dream Hall, several student teams work on their own innovative projects. The companies Solbian and Hevel Group are collaborating with students of the Solar Boat Team to produce the most innovative and highly efficient solar cells, so the team can show what is already possible with this innovative technology! 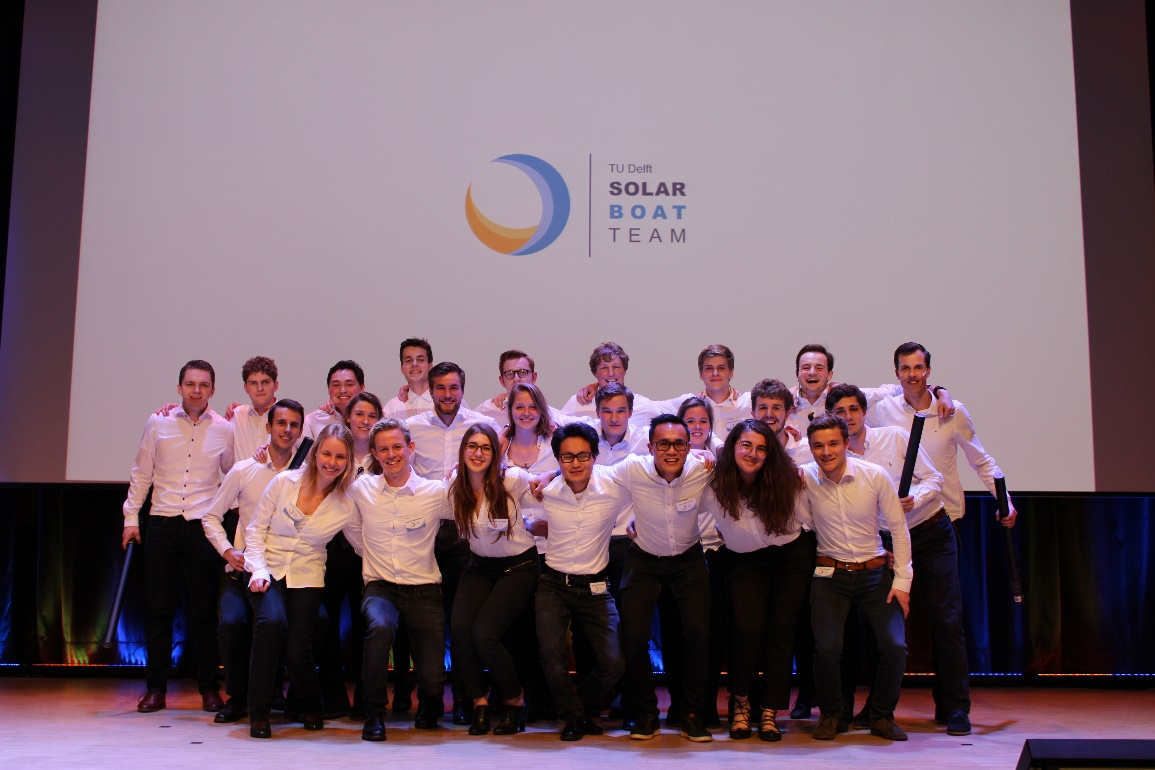 Never before has the TU Delft Solar Boat Team built a solar boat that will defy the open seas. Besides being the first Dutch team, it will also be the first student team to take on this challenge. The design is completely different from previous years, when boats were built for the inland waters. Over the past five months, the 28 students of the TU Delft Solar Boat Team have been working full-time to create the most optimal design. In order to cope with the high waves and heavy gusts of wind on the open sea, this year's boat will take the form of a trimaran. This is a boat with three hulls, so the boat can be built widely to provide the stability that is needed. With a larger solar boat, there will also be a considerably larger solar deck. The solar deck will be no less than 28 square meters, which is the same size as nine double beds together. With such a large surface, the energy that can be obtained from the sunlight is maximal. Due to the use of hydrofoils, the trimaran will not only be able to sail but can also fly above the waves at high speed. These hydrofoils lift the entire hull out of the water, reducing the water resistance drastically. This allows the solar boat to achieve a high speed on the energy that is only obtained from the sunlight.

Now that the design of the trimaran has been completed, the team has started with the production.

"After five months, our design is complete: all the sub-systems have been perfected and we have carefully considered every detail. The next challenge is the production phase, the actual realization of this design", says the Team Manager Kristian.

In just three months, the solar boat is fully produced and assembled so that the boat can defy the waters for the first time in the spring. Parts of the team work on different parts of the boat at multiple production locations throughout the Netherlands. The hulls are made in Emmeloord, the bearing wings in Medemblik and the carbon tubes in Sneek. Time is the limiting factor for the project. Designing, producing, testing and racing with a home-made solar boat in one year. This is a process where boat designers and shipping companies often take several years. Almost no one in the team has experience with this entire process and everyone has to become an expert about his / her part of the boat in a very short time. Furthermore, the design is truly unique. There has never been a solar trimaran wing built in history. So the boat's design needs to be carefully considered, and what is involved in this project.

"We have already participated in construction of several solar river boats across Russia and we see that the trimaran was designed very professionally”, says Igor Shakhray, CEO of Hevel Group. “As part of our collaboration, we have produced heterojunction solar cells with efficiency rating over 23% for the project. We wish TU Delft Solar Boat Team good luck for the sea competition!"

The next months, the team will test and optimize the boat, so that at the start of July it will be ready to battle against world-class boats during The Offshore Challenge, the world-championships for solar boats, in Monaco. They will not only compete for the world title, the students will also do a world record attempt at the end of July by crossing The Channel as the fastest solar boat ever. The team hopes to show how powerful sustainable energy can be at sea.

“Our commitment with the TU Delft Solar Boat team is now at its fourth consecutive year. That clearly demonstrates how strongly we believe in this project and its values. The purpose of the entire team - showing how a greener choice like solar power is possible and reliable on boats - is the message that we strive to convey since the beginning of Solbian journey in the field of photovoltaics. Thanks to projects like this one, such message is now more clear and well understood by the majority of people.” says Luca Bonci, CEO of Solbian.

The current team consists of a group of 28 students from ten different faculties at the TU Delft. Since its foundation in 2006, the TU Delft Solar Boat Team has been trying to inspire the maritime sector to become more sustainable. Until this year, the students participated in races for solar boats on inland waters. In this way, they have shown what a student team can achieve through the innovative use of solar energy. This is the first year that they are taking on the offshore challenge. The team wants to show that a lot is possible with sustainable techniques, even on the open sea. Furthermore, not one, but three passengers can sail in the boat this year. This is a big step towards passenger shipping, which will show that sailing on solar energy is also a viable option.

Hevel Group is Russia's largest integrated company in photovoltaics.  The company is the only producer of high efficient heterojunction cells and modules in Europe with production capacity of 160 MW yearly. Hevel Group is currently operating 16 grid connected PV stations with a total installed capacity of 289 MW and has a portfolio of next years' projects for the capacity of more than 700 MW. Company also comprises the R&D Center for Thin-Film Technologies in Energetics, the only specialized research and development center for photovoltaics in Russia. Besides supplying EPC services for utility-scale PV power plants Hevel Group develops variable engineering solutions for commercial transport and aviation, as well as for off-grid social and industrial infrastructure.

In the photovoltaic sector since 2007, Solbian is an affirmed manufacturer of flexible solar panels.

Born from the encounter between the most important Italian sailor, Giovanni Soldini, and an affirmed physicist, Marco Bianucci, the Turin-based company makes of innovation, efficiency and lightness the core features of its products.

The motto “Freedom powered by the Sun” describes in just a few words the essence of this firm, which year after year has worked hard to guarantee energy independence to its costumers, reaching over 60 countries around the world.